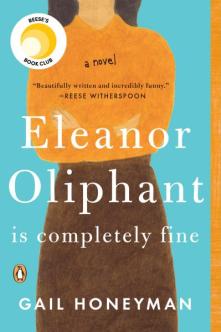 This book had been all over book blogs when it released last year, and I got around to reading it when I heard that Reese Witherspoon was making a movie about it. The book had a few issues, especially near the end, but it was a book that wrote about some difficult topics in a very compassionate and approachable way.

Eleanor Oliphant is a social misfit. She has no friends and prefers minimal interactions with her colleagues, who consider her a ‘wacko’; she spends every weekend chugging two bottles of vodka and pasta, with zero social interaction; she is awkward around anyone she meets. But status quo is absolutely fine for Eleanor. So when she and her colleague Raymond indirectly save an old man, Sammy, involved in an accident, and she develops a crush on an upcoming singer, status quo starts to change, pushing Eleanor to do things she would have never considered before.

Eleanor is a female Sheldon Cooper, except that she is a Sheldon Cooper with lots of unresolved issues. It is difficult to like her and her oddball behavior, but the author writes her with such warmth and compassion that she grows on you. As her past is revealed, you understand more about how she came to be that way, and you root for her to come out of her shell, bit by bit. Humor suffuses the narrative, not the punchline-jokes type, but one alternating between dark (Eleanor’s gradual revelations of her tragic past) and light (Eleanor’s interactions with Raymond and Sammy and his family),

Not everything in the book worked for me. The story threads involving the crush on the singer were the weakest – everyone can guess where that will go, and the denouement was dramatic, not in line with the subtlety in the rest of the book. The thread with Eleanor’s mother also could have had a better resolution: the current one didn’t make any sense to me.

All through the book, Eleanor says she is completely fine. Those words are hollow whenever she says it, but at the end, though she doesn’t say she is, you know she will be.